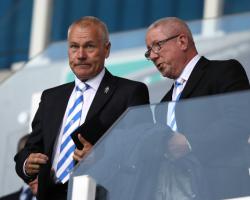 The Sky Bet League One club announced on Thursday that Taylor, who had returned to one of his former clubs in the summer to help out then-head coach Ady Pennock, was leaving his position.

Taylor, who also had spells in charge of the likes of Leicester, Brighton, Hull, Crystal Palace and Wycombe, had also stepped in as caretaker manager for the past four matches following Pennock's sacking at the end of September

It is expected Gillingham, currently second bottom of the league, will look to make a more experienced permanent appointment, with a move for Mansfield boss Steve Evans, Shaun Derry of Cambridge or another former manager, Martin Allen, all touted as potential candidates

It read: "Given Ady has now left the club, Peter has also decided there is no role for him going forward."

Taylor, however, said in quotes published by kentonline.co.uk that, given the right circumstances, he would have been willing to remain at the Priestfield Stadium.

"I wanted to carry on, not long-term, but I felt I could have helped

I felt I could have contributed to helping the team," he said

"I said to the chairman I would like to carry on

He didn't think it was a good idea and the people he is thinking about bringing in (as permanent manager) meant my role (as director of football) would change."

Taylor, who has also worked as assistant coach to the New Zealand national team, added: "I respect the chairman's opinion and his decision

He has to make these big decisions

"I came in to help a young manager

"In the end I felt that the role I came in for wouldn't be there anymore and it wouldn't have been right to stay on."

On Saturday, Gillingham head to Peterborough, where first-team coach Steve Lovell is set to look after the side