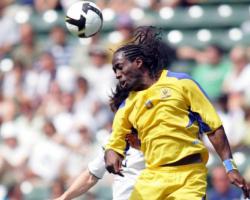 Gillingham 0-3 Scunthorpe: Match Report - view commentary, squad, and statistics of the game as it happened.Robin watches Iron triumphGoals from Paddy Madden, Neal Bishop and Gary McSheffrey helped Scunthorpe to a deserved 3-0 victory against 10-man Gillingham, pleasing the watching prospective boss Mark Robins in the process.Former Coventry and Huddersfield boss Robins has agreed to be Scunthorpe's new manager and he watched on, with caretaker boss Andy Dawson in charge, as his new side ran riot.Madden's fifth league goal of the season came shortly before half time, as he latched on to McSheffrey's through ball and rounded on-loan Gills goalkeeper Stephen Bywater.Iron captain Bishop doubled their lead with a point-blank header from Luke O'Neill's cross 18 minutes from time, before McSheffrey scored a solo effort after an incisive Scunthorpe break in stoppage time.This was the Iron's first away win since April 5, and it came three days after the club sacked manager Russ Wilcox.The early-season strugglers dominated even before Gills captain Doug Loft was sent off for a two-footed challenge on O'Neill nine minutes before the interval

Rory Fallon shot over from close range after connecting with Madden's cross, while the latter had an effort disallowed for offside following neat interplay with Jennison Myrie-Williams.Leading scorer Cody McDonald had Gillingham's best chance, but shot into the side-netting within a minute of kick-off, while Luke Norris saw his header spectacularly saved by Bobby Olejnik.Manager Peter Taylor was also sent off by referee Peter Banks for dissent shortly after Loft's dismissal