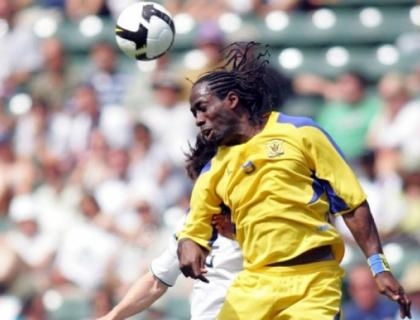 
Assombalonga dramatically back-heeled the ball past a number of Gills defenders and goalkeeper Stuart Nelson from Grant McCann's corner in the seventh minute of added time.


The striker's 14th goal of the season had earlier given the visitors an early lead, as the former Watford forward reacted quickest to fire home after John Bostwick's low drive was parried by Nelson.


Having lost their previous four away league games going into this match, Posh had goalkeeper Bobby Olejnik to thank in the first half as he produced good saves to deny Bradley Dack and Danny Kedwell.


However he could do little to stop the Gills' equaliser as Joe Martin curled in a spectacular 20-yard free-kick six minutes into the second half after McCann had fouled Cody McDonald.


McDonald's sixth goal of the season then put the hosts ahead after 70 minutes as headed in from Myles Weston's cross, with the striker wasting a golden chance late on before Assombalonga's late heroics snatched a draw.